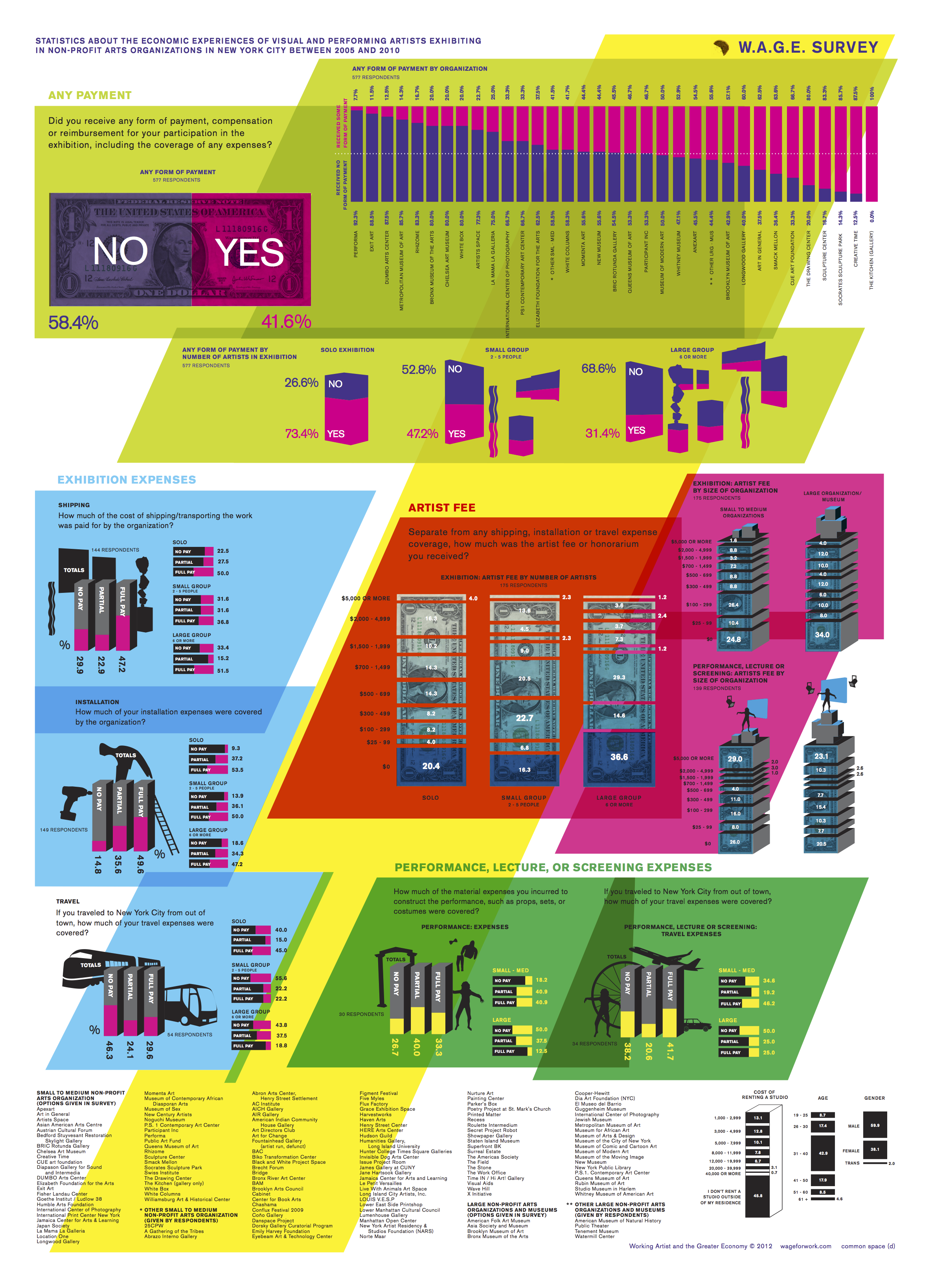 A downloadable two-sided poster of the survey results in graphic form is available here.

The survey was launched on September 22, 2010 and remained open until May 1, 2011. It collected responses anonymously, and was distributed via Web and Email outreach using W.A.G.E.'s mailing list, Facebook, various LISTSERVS, and an e-flux announcement. The combined reach of these mailings was to approximately 50,000 people. A total of 731 respondents provided data about Small to Medium Non-profit Institutions, while 246 respondents provided data about Large Non-profit Institutions and Museums.

This report was commissioned by W.A.G.E. and compiled by Sherry X. Xian of the Survey Research Institute at Cornell University. Her analysis combines the data of both surveys unless otherwise indicated and provides analysis only where significant differentiation within the data was noted.

Demographic information is representative of the 977 respondents who began the survey but not necessarily of those who provided specific information about their payment experiences, since only 577 of those who answered demographic questions also exhibited in a non-profit arts institution between 2005-2010.

Number of Artists who received Any Form of Payment

Respondents were asked to define the size of the exhibition within three different categories: solo exhibition, 2-5 artists and 6 artists or more. Results were compared using the number of artists in an exhibition as a factor.

Any Form of Payment by Institution

This data illustrates whether or not artists received any form of payment, compensation or reimbursement from specific institutions, including the coverage of any expenses. The institutions included in this table are those for which there were 4 or more respondents.

Significantly more respondents received some form of payment from:

Significantly more respondents reported that they did not receive any form of payment from:

Type of Exhibition and Size of Artist Fee received

When respondents reported having received an honorarium or artist fee for their participation in an exhibition, separate from the coverage of any shipping, installation or travel expenses, they were asked to define the amount of within 9 ranges. The following notes any significant differences within those ranges.

Respondents were asked how much of their installation expenses were covered by the institution using four different categories: None, Partial, All, and Had No Expenses.

The 2010 W.A.G.E. Survey poster, designed by Common Space Studio and including a drawing by William Powhida, can be downloaded here. Published in 2012.